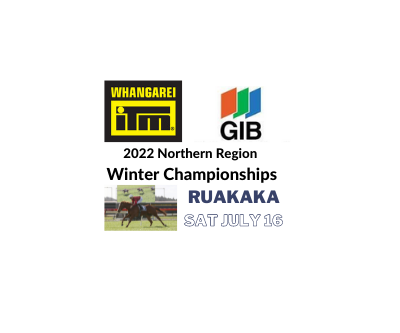 The Championships will culminate at Ruakaka on Saturday 16 July with FIVE $60,000 Finals

Read all the details and find the qualifying races:

Mike Beazley, Chair of Whangarei Racing Club stated, “After two years of very disrupted winter racing in the northern region, the club is very excited to be the first to host the ITM/GIB Northern Region Winter Championships and greatly appreciates the addition of the local sponsorship support in 2022, led by Shayne Heape of Whangarei ITM.”

Mike added, “NZTR is to be congratulated on the creation of the Innovation Fund that allows various racing initiatives across New Zealand to be developed from the ground up by clubs. The clubs, in many cases, are the owners and breeders who are passionate about racing and understand their regional needs.”

In the two months leading to Saturday 16 July, there will be qualifying races throughout the northern region for the five different Winter Championships. Entry to each final will be subject to qualification in heats across venues that include Te Rapa, Avondale, Pukekohe, Matamata, Ruakaka, Cambridge, and Tauranga.

Great opportunities exist for all classes of horses in the Winter Championships. There will be a final for - open class sprinters; open class stayers; a progressive final for the intermediate class horse who is rising through the ranks starting with only one win at nomination time; and separate finals for three-year-olds and two-year-olds run at set weights and penalties.

Auckland Thoroughbred Racing’s Executive General Manager Racing and Operations Craig Baker has led the development of the concept and commented - “given the level of prize money on offer, we expect there to be strong participation. The five finals will make for a very competitive race meeting at Ruakaka that will encourage punter interest and be a winter highlight for flat racing in the northern region.”

The $500,000 Stakes Innovation Fund was announced when NZTR’s stake increases were flagged in early July and clubs were invited to apply to the fund to further improve their race meeting performance.

The Club is thrilled with 529 nominations for the 5 races in the Winter Championships. Below is a summary and for each series you can click on the PDF link to view or print the nominations.

150 nominations for the Progressive series headed by Hit The Switch and Taoiseach.

69 nominations for the Sprinters series headed by Crystallize, Irish Girl, On The Rocks and Germanicus.

92 nominations for the Stayers series headed by On The Rocks, Masetto, Quiz Kid and Two Maison.

The Whangarei Racing Club is thrilled with over 520 nominations for the five $60,000 finals that constitute ITM/GIB Northern Region Winter Championships on Saturday 16 Saturday.

The contest to qualify for the finals begins on Saturday 21 May at Te Rapa and finishes at the same course on 9 July. In total there are over 60 qualifying races at seven different courses in the northern region.

Nominations have been received from as far as Hawkes Bay and New Plymouth.

For those who missed the opportunity late nominations will be accepted by the Racing Bureau up to 4pm on 13 May at a fee of $50.

Great opportunities exist for all classes of horses in the Winter Championships. There will be a final for - open class sprinters; open class stayers; a progressive final for the intermediate class horse who is progressing through the ranks starting with only one win on 3 May; and separate finals for three-year-olds and two-year-olds run at set weights and penalties.

To be in one of the finals the horses need to have earned points in the qualifying races across the northern region race meetings.

All details of the races and the list of nominations can be viewed at https://ruakakaracing.co.nz/itmgib